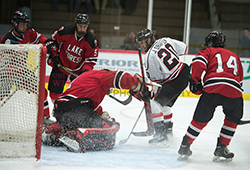 When the Falcon Center — UWRF’s new sports complex — is completed next year, Paul Dykstra’s name will be emblazoned on the men’s hockey locker room. It’s an appropriate place to bear the moniker of this longtime supporter of his alma-mater. Dykstra and his wife, Karen Kracher, have spent years giving back to UWRF. Over decades, they’ve supported both the Faculty Excellence Endowment and the Academic Excellence Scholarship. Dykstra established the Paul and Robert Dykstra Endowment with his father, and he’s even served on the UWRF Foundation Board of Directors.

But his latest effort to support the university is something close to his heart. Dyskstra said he looks fondly upon his days as a winger for the Falcon Hockey team. During his senior year in 1983, the team won the school’s first-ever National Championship. Their 12 to 5 win over University of Michigan-Dearborn’s Wolverines is something that’s never far from his mind.

“It was really exciting, and I think about it all the time,” said Dykstra, who visited campus and attended the 2015 Scholarship Recognition Event in October.

In honor of those fond memories, Paul has pledged to sponsor the men’s hockey locker room. When the Falcon Center is complete, the room will be called the Paul B. Dykstra Men’s Hockey Locker Room. While on campus recently, Dykstra visited the locker room.

“I absolutely love it,” he said. “It was a great opportunity to give back to the university.”

Recently retired as CEO of Viad Corp., a travel- and marketing-services company based in Phoenix, Ariz., Dykstra said he’s enjoyed being able to come back and visit his alma-mater.

“It’s just a great town and a great campus,” he said. “It’s always great to learn a little bit more about the students.”