The Greenhills: Giving Back 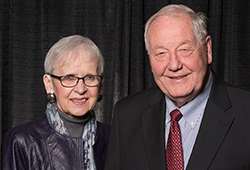 At his high school commencement in 1954, Gaylon Greenhill sat quietly and listened to Gordon Stone - a former dean at the University of Wisconsin-River Falls - speak. Greenhill wasn't sure what he would do after leaving Colfax High School, but as Stone's speech ended, an idea began to form in Greenhill's mind. He would go on to enroll at UW-River Falls, graduating in 1958. He later pursued graduate study, ultimately earning his doctorate of political science from the University of Illinois, and was awarded a Fulbright Scholarship to Norway.

In 1962, Greenhill began his 37-year career as a teacher and administrator at the University of Wisconsin-Whitewater, culminating in his service as Chancellor. A life dedicated to higher education began the day after Stone's speech and it has continued into Greenhill's retirement.

He and his wife, Hannah, have plans to ensure their legacy continues long after they have passed. By including UWRF in their wills, Greenhill said they could keep helping students well into the future.

"I can't think of a better place to get an excellent undergraduate education than UWRF," he said. "It was that way for me when I was there, and it is obvious UWRF continues to provide a stimulating atmosphere to students."

The Greenhills have created a four-year scholarship for incoming freshmen from the couple's home counties, Dunn and Barron. They also welcome every opportunity to see their donations at work.

"Every time I visit campus I come away with a profound respect for what is going on there," he said. "I'm proud to be an alum."