Impacting the Future of Science 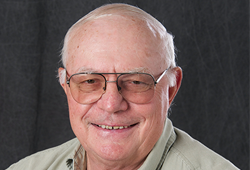 Many people know the financial strain that getting a higher education can bring. Dr. John E. Butler, a 1961 UW-River Falls graduate, knows this strain well. One of seven children raised by parents with only grade school educations, Butler could not have afforded to attend a major state university. "UWRF gave me a start for a successful career at a price I could afford." Although he worked his way through college Butler realizes that this is not always possible for today's students, so he feels strongly that someone has to help.

Butler helped out in a big way. In 2012 he endowed the J.E. Butler Molecular Biology Scholarship with a very generous initial contribution. The scholarship will cover half the cost of in-state tuition plus research and conference expenses for a Biology major interested in eukaryotic research. "I wanted to see others who came from my background have the same opportunity," states Butler. "I took advantage of the federal policy of rolling-over my IRA required minimum distribution to a charitable organization without the penalty of income tax." In addition, UWRF is scheduled to receive additional funding from tax free annuities and from the sale of his home on his death. This would greatly enlarge the scholarship funds at UWRF." When asked if planned giving, specifically through one's own estate, is an option that other UWRF alumni should consider Butler states simply, "Yes, of course." Butler hopes that his action will stimulate others to endow other scholarships or merely contribute to the Butler or other established scholarship programs. UWRF, which also sports an agriculture college, is nicely located between two large veterinary and medical schools in Madison and the Twin Cities. Building a strong molecular biology program at UWRF could serve as a magnet for recruiting talented high school students who could then pursue careers in medical and veterinary molecular biology and immunology. This would strengthen the reputation of UWRF as a rich source of potential young scientists.

Dr. Butler received his Ph. D from Kansas University and is an international leader in research on the antibodies and antibody genes of cattle and swine, mucosal immunology and solid phase immunoassay. A recipient of a two distinguished veterinary immunologist awards, he has published over 240 articles; 29 in the 2011-2013. In September he will be a featured speaker at the 10th International Veterinary Immunology Symposium in Milan, Italy. He currently resides in Iowa City, IA where he recently retired as a Professor of Immunology and Microbiology at the Carver College of Medicine at the University of Iowa.