Paying it Forward Sooner Rather Than Later 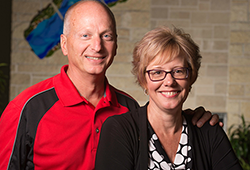 On a fall day in 1980, UW-River Falls sophomore Donnette Wheelock went to her mailbox in Stratton Hall and found what she considered a major mistake. It was a receipt for her tuition, housing and food expenses for the following two quarters.

"I had paid for the first quarter and the bill was coming up for the second and third quarters," she recalls. "There was a receipt saying that everything had been paid including tuition, food and dorm fees."

She checked with the university, which confirmed that no mistake had taken place. Rather, someone had inquired and wanted to know what her expenses were going to be — and paid for them. The donor wanted to remain anonymous, and has.

"To this day we have no idea who it was," says Donnette's husband Greg, a fellow UW-River Falls alumnus. "That got us thinking, let's..."

So the Wheelocks recently provided the College of Agriculture, Food and Environmental Sciences with multiple gifts to provide scholarships for full-time CAFES students. It was in 1985 when Greg, working for an agriculture finance firm, began working in the area of crop insurance. In 1990 he formed the family business, Crop Insurance Services. It has grown, in Donnette's words, exponentially.

Based in Mankato, the service provides risk management information using such techniques as GPS mapping for clients, and Greg is actively consulted by academic and business interests on issues — local and federal — affecting crop insurance.

"We started with nothing, and we're a very successful crop insurance agency in the Midwest," she says. "Greg is looked at as one of the experts in the area. He does a lot of networking in the ag field and really stays current with the issues out there. Farmers can rely on him to present to them what's most relevant. And with crop insurance being a federal program, things are constantly changing."

Their hope in providing the scholarship is that other River Falls students get to experience the kind of rewarding future the Wheelocks enjoyed after leaving River Falls.

The two have already included the university in their estate planning, but they added the scholarship as a way to make things happen faster.

Greg says, "There are others who could benefit from money sooner rather than later."