Leaving a Legacy to Support the Future 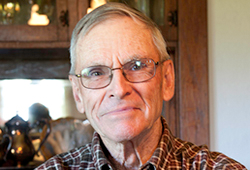 It's not every day that you meet someone who studied with the prestigious teachers that many of the UW-River Falls campus buildings are named after. 1957 graduate Wayne Peterson however is one such lucky alumnus. "During my time at UWRF I was a lab assistant to Professor Ed Prucha who taught bacteriology in the College of Agriculture," states Peterson. "I learned a great deal from him and was thankful I was given the opportunity to work under his guidance." Peterson also studied under Agriculture Professors Arthur Johnson, Melvin Wall, Dick DeLorit, and Director of Agriculture, John May. He also knew influential faculty and administrators such as Dr. Marion Hawkins, Dr. Walker Wyman and President Kleinpell.

As for many UWRF alumni, it was Peterson's meaningful relationships with faculty that drove his successful undergraduate career and motivated his continuous pride in the university. His loyalty is so strong that it has inspired him to develop a giving plan that provides for UWRF students both today and even after he is gone.

Peterson first established an annual scholarship at the UWRF Foundation in 2003: The Petersons' Valley View Farm Scholarship. His scholarship awards $2,500 to one or more high school seniors who will be entering the College of Agriculture, Food and Environmental Science. The award is renewable annually if the recipient maintains a 3.0 GPA and stays in the college. "The only hope for the future is young people. I am happy to give my money to help educate our future," states Peterson.

Peterson is also in the process of updating his will so that UWRF will receive a majority of his estate. He explains, "The Foundation has sent me a lot of information about planned giving and giving through my estate appealed to me. I think this is a good idea for other alumni depending on their situation. This is the best money I have ever spent. I can't think of a better way that I could have spent it."

Wayne Peterson received one of the first non-teaching bachelor's degrees from the University of Wisconsin-River Falls, then called Wisconsin State College-River Falls, and went on to receive his graduate degree in College Administration. He currently lives on his family farm in Gleenwood City, WI where he hosts a summer concert series called "Concerts in the Country."